My Festival Moment... As I Best Recall

Okay, so it’s been a month since my short film, Artistic Closure, premiered at the Stony Brook Film Festival. It’s taken me a month to process that whole experience, and I’m still not quite sure there’s a clear blueprint etched in my memory.

First and foremost, it was an amazing experience. I was treated like..., well, let’s see... 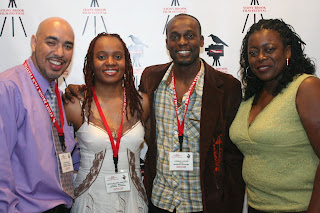 I guess because I am, but, that’s besides the point.

The Stony Brook Film Festival has one of the largest screens - I mean, gigantic. A forty-one foot screen - blemishes and all, right there.


Over a thousand seats. Though my showing wasn’t sold out, there were enough faces glaring down at me during the question and answer period to make me want to run in a corner and suck my thumb.

Some time ago, I held a private viewing of the short for a few friends and family. I received feedback that enabled me to make a few changes before sending it out to festivals. Some of those who had seen the earlier cut showed up to the Stony Brook viewing and were truly surprised at how much of a difference a LARGER screen made.

This was one of the many learning experiences I gained from having my short viewed at a festival - especially one with a screen so large. When you’re sitting down editing, you’re viewing it from a much smaller screen, so what you think is barely noticeable in a corner, won’t be the case when it’s on a huge theater screen.

I was lucky enough to have edited on a 32 - inch screen, so I didn’t have any unwanted surprises like a foot peeking in or someone standing in the corner removing a wedgie. What I did have was wonderful surprises, like the original artwork created for the film magnified so that every detail was fully imagined and appreciated.

The experience of sitting in the audience as others watch what you’ve created is beyond amazing. There were a few lines and moments in the film that I just knew only I would get, and wham! Laughter where I hoped it would be, and sometimes where I myself had overlooked. Audiences are amazing, and sometimes quite frightening.

As a writer/filmmaker, I’ve always had the problem of trusting my audience.

This is what they do. For most of them, it’s not their first time. They’ve pretty much got it down to a science - you know, the whole movie-going experience, and it’s my job as a filmmaker to deliver the goods. They’ll do their job and I’ll do mine.

The first of anything holds a special place with all the mixed emotions that go along with it. The festival experience was both everything I hoped for and nothing I could have imagined.

I’m glad my body was there to experience it. My mind..., well, that’s an entry for another day.
Posted by Tracy at 7:28 PM

It Is What It Is Productions

Tracy
New York
Discovering the power of the written word and the captured image.